Part 1: An introduction to human-centred design

Human-centred design isn’t a thing just for creative Einsteins in design bunkers. Many community organisations have long been using a human-centred design approach to creating new programs, products and services for the communities they serve. Some may be doing so and not even realise it!

In this short series of blog posts, Designing for people, we aim to demystify human-centred design for those who might be new to it and talk about some of the ways it can be used to help community organisations (like the Infoxchange Group and the organisations we work with) to make a positive impact with their work.

In part 1 we cover the key points: what human-centred design is, how it can be helpful, and what on earth are all the post-it notes about? 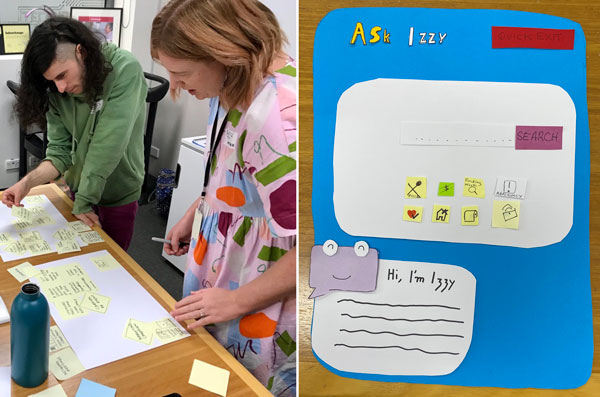 Left: Callum and Beccy from Infoxchange at a design workshop focusing on improvements to Ask Izzy for people with disability. Right: a prototype of an "Ask Izzy assistant" created at the workshop.

What is human-centred design?

The underlying principle of human-centred design is really simple – humanising the design process by empathising with the people we’re designing for.

It’s a process that starts with the people we’re designing for (“end-users”) and finishes with new solutions that are purpose-built to suit their needs.

By understanding end-users’ behaviours, preferences and problems we’re able to explore ideas from their perspective. It’s a powerful way of ensuring that we’re focusing our efforts in the right places and in the right ways to build solutions that work well for them.

At Infoxchange, we use a human-centred design approach in creating our products and services, ensuring that they’re inclusive, accessible and appropriate for the people we’re designing them for. For example, we’re currently using a human-centred design approach to explore ways to improve Ask Izzy to make it more inclusive for people with disability, their carers and families. So far this has included conducting research interviews and workshops with people with disability and people working in the sector to gain a deeper understanding of what it’s like to be in their shoes, and the reasons finding help can be difficult.

For too long, big decision makers in powerful positions called all the shots when it came to building solutions and services that they might never have to use themselves.

Human-centred design isn’t the silver bullet to addressing hardcore systemic power dynamics, but it is a different way of understanding, solving problems and building things that’s flexible enough to accommodate different perspectives, giving more people a say. It’s a collection of tools and methods that tries hard to focus on building solutions around people and their contexts, instead of around what suits an organisation.

It’s also a lot less risky to build things that have been developed through deep listening and regular check ins with the folks its intended for. Talking to people and trusting in what they tell us means we're more likely to succeed when we make products or come up with new ideas to solve problems. 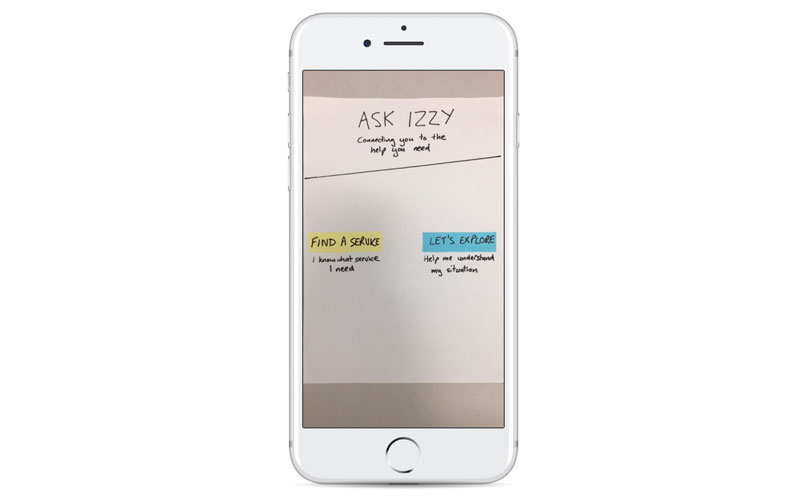 Another example of what a prototype might look like. It shows an alternative home screen for Ask Izzy, which was doodled at one of our Ask Izzy Plus workshops.

We might create a new tool that sounds impressive to our funders or stakeholders, or uses amazing new technology, but doesn’t solve any problems for our end-users. We might design a program that just copies what another organisation is doing. We might even design something that looks beautiful to us but is culturally inappropriate to the people we’re designing it for.

Isn’t it just for techy people and designers?

In a way, we’re all designers. Working in the community sector, you’ll be using your creative problem-solving skills every day to design solutions that address the different needs of the people you serve.

Human-centred design practitioners have a lot to learn from a sector that’s had people and communities at its heart from the very beginning. Whilst we might bring different tool kits (hello post-its!) or use weird terminology, most of the time we’re just trying to listen more carefully and bring together more collaborators.

I recently chatted to a colleague about how he’s finding his new role at Infoxchange. He told me he’s been talking to his network so that he can better understand the steps they take to meet reporting requirements. He said his previous experience as a counsellor has provided him with techniques he can leverage to understand where folks are coming from and draw out meaningful understanding of their world.

This simple story demonstrates huge parallels in the way we both go about our jobs, even though the words we use are different. As a designer, I’d call this process “qualitative research” or “customer journey mapping”. My colleague might not use the same terms, but the ultimate goals are pretty much the same: involving and empathising with the people we’re problem solving for. 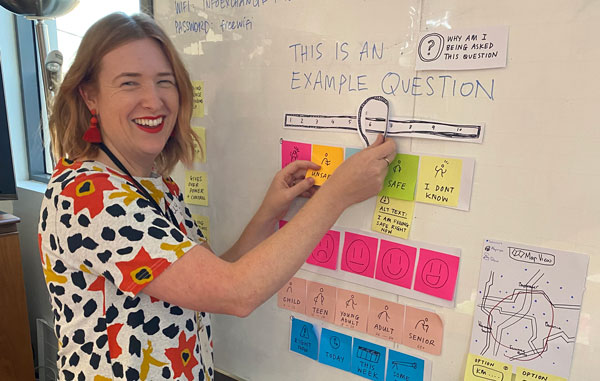 What’s with all the post-its?

It’s true, we get through a lot of post-it notes in our design workshops.

Post-its can be a really useful tool to use in collaborative activities. They keep us focused on a task, so everyone can be present and contribute to the conversation. They’re easy to colour code, display and shuffle around so they can be read, grouped and re-grouped.

There are no hard and fast rules for when to use post-its!

Lots of our work had to move online during the lockdowns. We used a program called Miro which is kind of like a virtual whiteboard complete with digital post-its – they even have little shadows and turned-up corners like the real deal!

Collaborating online definitely comes with its challenges, but there are upsides too. Working digitally meant we were able to reach folks that might traditionally have been excluded from the process because making it into a physical space might have been off the cards.

Post-its are just one way of capturing and organising learnings and ideas though. People also come together in Facebook groups, Google docs, in Zoom chats and lonnnnng email threads. I’ve seen hand-drawn papers, fake cardboard phones, even people acting out a scenario! All in the name of trying stuff out early and communicating an idea.

Interested in digging a bit deeper? Here are some introductory resources to get started:

Filed in: Digital skills , IT advice , About Infoxchange | Tagged as: design , Ask Izzy